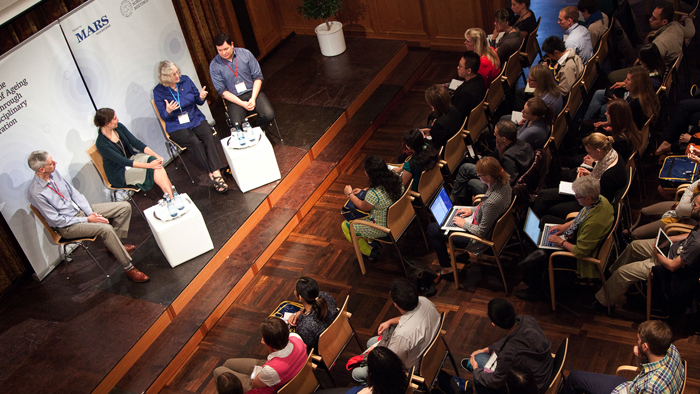 Lindau, Germany (July 3, 2014) --- At the 64th Lindau Nobel Laureate Meeting, Nobel Laureate Prof. Elizabeth Blackburn and Dr. Hagen Schroeter, Director of Fundamental Health and Nutrition Research at Mars, Incorporated, explored how current approaches to aging research could be advanced by strengthening the connections between disciplines, sectors and stakeholders. The panel engaged an audience of 100 of the world's brightest young researchers, and considered how to integrate a broad range of scientific fields more effectively in order to tackle the challenge of healthy aging.

At the panel discussion, Hagen Schroeter spoke about his experience of convergent research: “Integrating insights from distinct disciplines and across sectors has greatly benefitted Mars, Incorporated’s fundamental science programs and opened new pathways to innovation.” Hagen Schroeter leads a research program into cocoa flavanols—phytonutrients that have been seen to maintain cardiovascular health. “Bringing together the expertise of a broad group of partners and stakeholders has resulted in a far deeper understanding of flavanols, which may lead to novel applications in the context of healthy aging.”

Elizabeth Blackburn, Professor at the University of California, San Francisco, spoke of the potential to go beyond existing scientific and regulatory standards: “A reevaluation of current approaches to integrate individualized life factors could better inform public health policy discussions, and contribute towards the goal of optimizing aging”. Elizabeth Blackburn’s work on telomeres—a portion of the chromosome linked to aging—earned her the 2009 Nobel Prize for Physiology or Medicine.

Adam Smith, Chief Science Officer of Nobel Media, moderated the event, which also included contributions from Lindau Young Researcher Claudine Gauthier, a postdoctoral fellow from the Max Planck Institute, Leipzig. After participating in the panel discussion, Claudine commented, “Being part of this conversation on aging—one of society’s most pressing issues—has been a great opportunity. The panel discussion highlighted that a wider collaborative network and more dialogue with industry and policy makers will be necessary to move science from paper to practice. I hope to be able to apply some of these ideas in my future scientific career.”

2014 marks the eighth year of Mars, Incorporated’s partnership with the Lindau Nobel Laureate Meetings. Since 2010, Mars has hosted annual panel discussions focussing on interaction with the Lindau young researchers and bringing together perspectives from the full range of scientific disciplines present at Lindau. Each year, Mars also supports young researchers to attend the Lindau Nobel Laureate Meetings and collaborates with Nature Publishing Group (NPG) to make the dialogue at Lindau accessible to a global scientific audience through NPG’s online and print activities.

About the Lindau Nobel Laureate Meetings